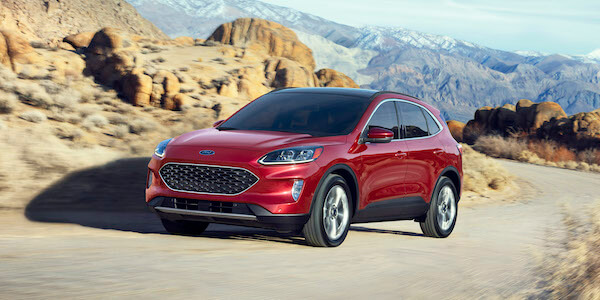 All-new for 2020, the Ford Escape Hybrid received a best-in-class combined fuel economy rating of 41 mpg for front-wheel drive models, according to EPA estimates. Thanks to its excellent fuel economy, the new Escape Hybrid also has an EPA-estimated driving range of 582 miles on a single tank, allowing you to stop for gas less frequently.

When designing the new Ford Escape Hybrid, Ford wanted to ensure there was still plenty of room for passengers and cargo, so the liquid-cooled lithium-ion battery pack was placed under the second-row seats, rather than taking up lots of space in the cargo area. This efficient use of space and long driving range make the 2020 Ford Escape the perfect vehicle to take on a long road trip.

The available 12.3-inch digital instrument cluster includes an EV coach feature that lets drivers know if they are currently using electric or hybrid power, and encourages drivers to save fuel depending on their current power needs. Five selectable driving modes help to achieve this, as the all-new Escape features an eco mode that can be used when extra power isn’t necessary.

The original Ford Escape Hybrid was the first hybrid SUV on the market when it was introduced in 2004. The first-generation Escape Hybrid proved to be very popular over the years, and owners have been asking for it to return to Ford’s SUV lineup. Ford has answered with a brand new Escape Hybrid that offers better efficiency and more features than ever before.

Want to learn more about the 2020 Ford Escape Hybrid and other hybrid vehicles from Ford? Visit us today at Sam Pack’s Five Star Ford Dallas and check out our online inventory.